People sometimes ask how I go about looking for books.  Why do I pull off one book in a bookshop rather than another?  I’m not sure I have an immediate answer to this question, but one type of book I often end up looking at are those in oblong formats.  They appeal to me, physically, but also their very nature lends themselves to certain types that I like to deal in, namely illustrated books (perhaps a sketch book, or a volume of prints) and music.  Here’s one such volume which contained yet another surprise: 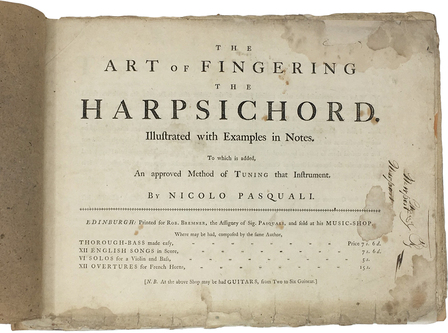 It’s a copy of the rare first edition of Nicolo Pasquali’s The Art of Fingering the Harpsichord. Illustrated with Examples in Notes, published in Edinburgh c.1757/8.  Later editions were published in London.  In his preface, the publisher, Robert Bremner, writes that ‘having purchased the whole musical Effects of the Author after his Decease, this Work was found amongst them, ready for the Press, and is presented to the Public without any Alteration’.  According to Charles Burney, Pasquali (c.1718–1757) came to London from Italy about 1743 ‘and from then on was extremely active in the three main British musical centres. He spent the period 1748–9 in Dublin, where he produced an oratorio, Noah, and a masque, The Temple of Peace.  By 1750 he was back in London, returning to Dublin in 1751.  From October 1752 onwards he lived in Edinburgh, where he led the orchestras at both the Canongate Theatre and the Musical Society, wrote and acted in a “whimsical Farce” entitled The Enraged Musician (based on Hogarth’s print), and composed, among other works, a Stabat mater which continued to be performed in Edinburgh after his death’ (New Grove).  Much of Pasquali’s music is now lost. 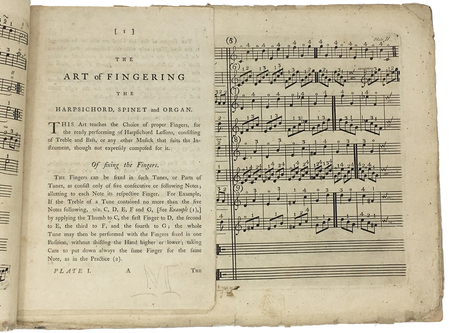 One of the fascinating aspects of Pasquali’s book is the way Bremner has decided to present it.  The fifteen pages of engraved music are interpolated throughout the letterpress text, which is largely printed on folded half-sheets, so it ends up being a mix of oblong folio and octavo.  This is unusual, and a bit of a headache for the binding to put together, but it does mean the reader can easily refer to the musical examples whilst reading the book, rather like a throw-out plate in, say, a scientific book of the period.

Posted in
Previous: A blind lexicographer Next: Another oddly-shaped book