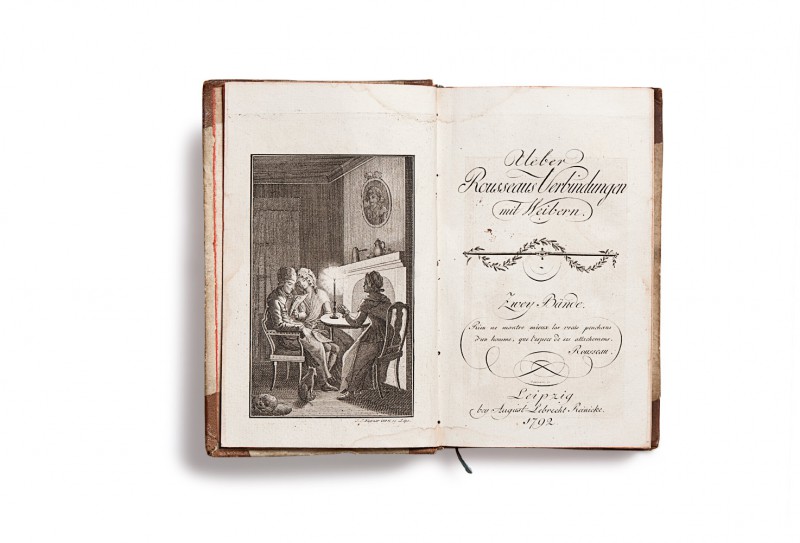 Today is the 300th birthday of the great philosopher Jean-Jacques Rousseau, so I thought I’d post this book from 1792, ‘On Rousseau’s connections with women’, by Carl Gotthold Lenz (1763–1809), described by one bibliography as ‘a rarity of the very first order’ (which it is).  In 1790, Lenz had published a Geschichte der Weiber im heroischen Zeitalter (‘History of women in the heroic age’), after which he turned to Rousseau, the final parts of Les confessions having just appeared in German.  The results of his study found expression in this book, a fascinating piece of biographical-literary analysis and very unusual for its time.  The first 60 pages are taken up with the history of the writing and publication of Les confessions, and the contemporary literature surrounding it.  The text proper charts Rousseau’s life through the various women he met, with obvious focus on Françoise-Louise de Warens, and Thérèse Levasseur, but other women, too, such as Mlle Lambercier (by whom he was famously beaten, not without enjoyment, as a child), childhood crushes Mlles Vulson and Goton, and even the woman who ran the lending library in Nyon.  As Jules Michelet later wrote: ‘le vrai Rousseau est né de femmes’.

2 responses to “Rousseau and women”