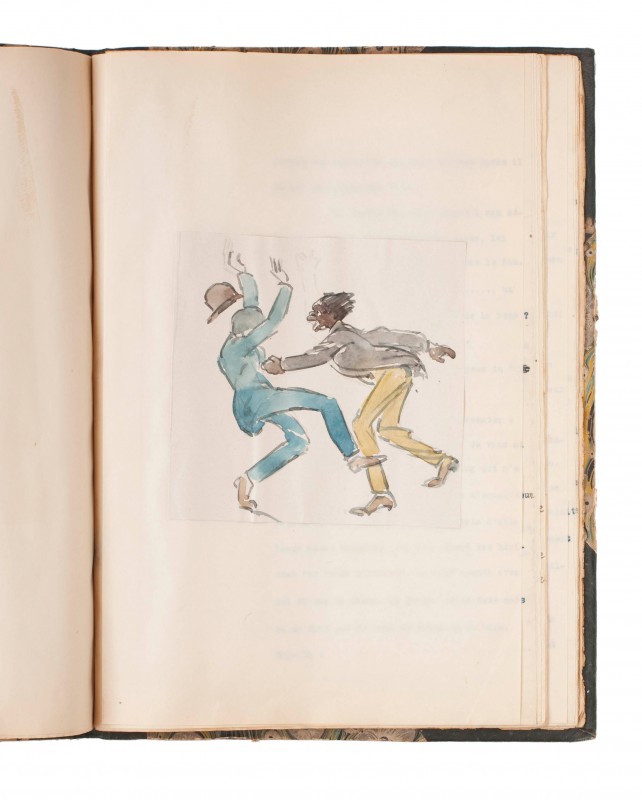 This original watercolour illustration appears in a typescript copy of Pellobelle Tinkea gentilhomme de fortune, a powerful anti-assimilationist novel, set in West Africa, Europe and America 1915–19, which focuses on, among other things, the status of ‘author’ among African writers of the time, a status which was denied them.  The authors are given as Hippolyte and Prosper Faraud.

The narrative begins with Pellobellé’s birth and ends with his return to his native village where he can forget his Western adventures and resume an African life.  But first the authors have their hero go through various stages of assimilation into French society.  First, Pellobellé is recruited as a tirailleur, a native soldier, through which he encounters white women (in a brothel) and discovers smoking, drinking, and gambling, but he also meets a certain ‘demoiselle Teinturier, femme de lettres et peintre’, who teaches him to read and write, and to paint (an allusion to the artist and writer Lucie Cousturier, whose own travels in French West Africa in the early 20s led her to fight for the emancipation of people of colour).

Soon his Company is sent to France to fight: Pellobellé is wounded and transferred to Paris, where his ‘improvement’ continues thanks to a young duchess, helping tend the sick in hospital, who offers him somewhere to stay when he has recovered.  Pellobellé invents for himself a royal lineage so that he can pass himself off as a prince, trains to be a lawyer, and, encouraged by his new student friends in the Quartier Latin, writes a book which proves a critical success.  He next turns heavyweight boxer, after a brief altercation in the street reveals a prowess with his fists, and is soon touring America, but when he is set upon by a lynch mob in Atlanta, he flees to Savannah and boards a boat for Conakry in Guinea, where he can forget the years spent among whites.

Posted in
Previous: The art of the violin Next: Bowling nights in 1880s New York