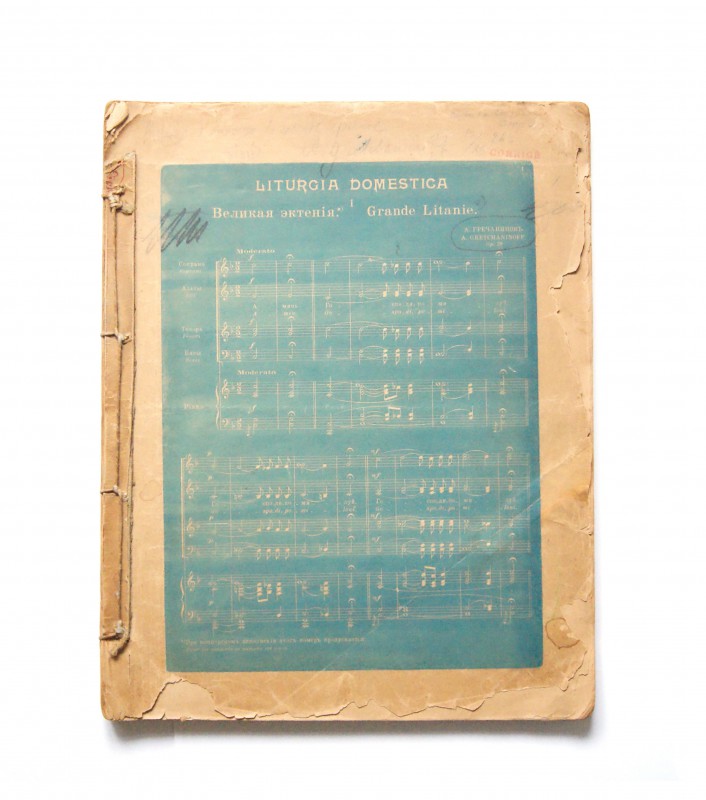 These are the page proofs, with autograph corrections by the composer, of Aleksandr Grechaninov’s Liturgia Domestica (1926/7).

Grechaninov (1864–1956) is best known for the sublime choral music he wrote for the Russian Orthodox Church.  It is what you expect to hear in Russian church music, comparable to, say, the style of Rachmaninov’s Vespers.  But there was evidently also an unorthodox streak in Grechaninov, for he was the first (and, maybe, the last) Russian composer to write sacred music with instrumental accompaniment.

The Liturgia Domestica was written in 1917, at the time of the October Revolution.  Grechaninov recalls the time in his memoirs: ‘Many music lovers like to sing church music while accompanying themselves at the piano.  Yet the average amateur experiences considerable difficulty in trying to play from a choral score written in four parts.  I decided to write a simple sacred song for a single voice with piano accompaniment, to the words “O Holy God.”  Later I added several liturgic chants to it and put them together under the ancient title Demestvennaya, that is, Domestic Liturgy.

‘I wrote this Liturgy in the autumn of 1917 during the Bolshevik uprising in Moscow.  The bitterness of the Hallelujah in this Liturgy is explained by my horrible experiences during that period.  Every time I hear this Liturgy the memories of those dreadful days come to mind.  Peaceful citizens kept vigil in their homes.  There were trenches right in front of our house.  No one dared appear in the streets.  Gunfire and the sound of the cannonade broke the ominous silence.  At any moment a stray bullet or a cannonball might have hit our house which stood between the battle lines …’ (My Life, tr. Nicolas Slonimsky, New York, 1952, p. 121).

Grechaninov soon expanded on his initial ideas, scoring the work for tenor, strings, harp, and celeste, and the premiere was given in Moscow in 1918.  He later added four further movements, conducting the premiere of this version himself in Paris in 1926 (he had left Russia the year before; in 1939, he emigrated to America).  These page proofs date from the Paris period, and show Grechaninov returning to his original scoring intention—a domestic piece for voice(s) and piano.  It was published in 1927 by A. Gutheil (S. & N. Koussewitzky) in Moscow and Breitkopf & Härtel in Leipzig; the printing itself was done in Paris by Delanchy-Dupré.

Posted in
Previous: Bowling nights in 1880s New York Next: A devil of a book

One response to “Revolutionary music”