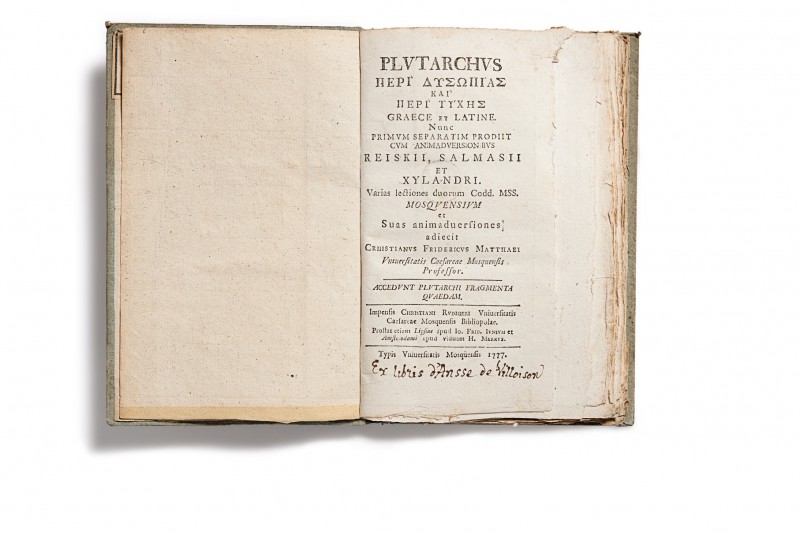 Here are two of Plutarch’s Moralia, published from twelfth-century manuscripts in the Synodal Library in Moscow in 1777 by the German philologist Christian Friedrich Matthäi, and dedicated to Ivan Shuvalov, the Maecenas of the Russian Enlightenment.

In 1772, the 28-year-old Matthäi took up a teaching post in Moscow.  Within four years he had become an associate professor at the University there, and in 1778 was made Professor of Classical Philology, a position he held for six-and-a-half years.  Ill health forced him to return to Germany, but he resumed his old Chair in 1804.  He died in Russia in 1811.  In a Festschrift to mark the centenary of the University’s foundation, in 1855, Matthäi was praised for bringing the rich manuscript collections in Moscow libraries to the attention of the world, in publications such as this book and two important catalogues of Greek manuscripts. 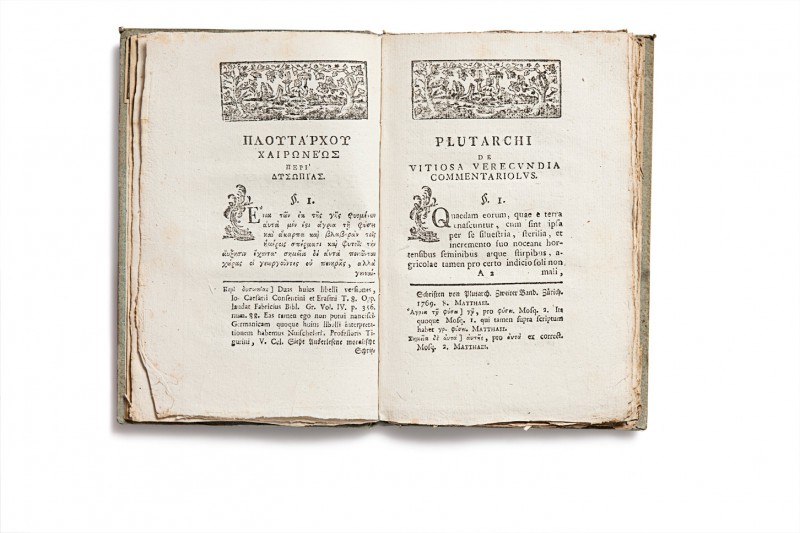 But Matthäi brought such manuscripts to the world in another way, too: he was a book thief.  In 1898, he was revealed as having stolen some 80 books and manuscripts from the Synodal Library and sold them to German collections.  As early as 1789, none other than the great Russian writer Nikolai Karamzin, on seeing some Greek manuscripts at the Royal Library in Dresden, had asked ‘where have these come from?’, but Matthäi was presumably above suspicion.  His position allowed him free access to libraries and the ability to take things away, whereupon he swapped a valuable manuscript for a worthless one (few at the libraries knew enough Greek to realise) and returned that to the library.

I had never seen an eighteenth-century Russian book  in boards before, its leaves uncut.  One wonders whether the book was perhaps exported in sheets and then bound up once it had reached Leipzig or Amsterdam.  This copy obviously left Russia early on: the ownership inscription is of the celebrated French Hellenist Jean-Baptiste Gaspard d’Ansse de Villoison (1750–1805).

Posted in
Previous: Landmark music printing Next: The first book published in 'California'