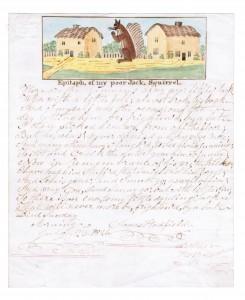 I couldn’t resist buying this when I saw it.  Someone writing about the death of his squirrel?  In 1826?  Come on, who wouldn’t?  There’s even a picture of the poor creature.  I first thought it was perhaps written by a child, but in fact the history of the poem proved much more interesting.

I soon discovered that the author, James Hadfield (1771/2–1841), was a patient at London’s Bethlem Royal Hospital, or ‘Bedlam’ as it’s more popularly known, the world’s first psychiatric hospital.  He even gets an entry in the Dictionary of National Biography.  Why?  Because, over twenty-five years before he composed his poem, he had been committed to the Hospital after attempting to kill the King.  Hadfield had fallen under ‘the sway of a millenarian cult, becoming convinced that his death at the hands of the state would effect the second coming.  He apparently reasoned that treason—or even attempted treason—would carry mortal punishment, and thus conspired with Bannister Truelock to assassinate George III at Drury Lane Theatre on the evening of 15 May 1800.  As the king acknowledged the orchestra’s playing of the national anthem, and the audience rose to its feet to welcome him, Hadfield climbed on a seat and fired a horse pistol at the royal box.  The assailant’s actual intention remains a mystery because when the king, unhurt, insisted on speaking to the soi-disant assassin, Hadfield greeted him by saying, “God bless your royal highness; I like you very well; you are a good fellow”’ (Oxford DNB).  Tried for high treason nevertheless, Hadfield had as his defence the leading barrister of the day, Thomas Erskine, who secured an acquittal by arguing partial insanity, a first in an English criminal trial.  Hadfield spent the remaining 41 years of his life in a cell.

Patients at Bethlem were allowed visitors, and Hadfield, perhaps due to his notoriety, seems to have attracted many.  One such visitor was the French socialist Flora Tristan (1803–1844, Gauguin’s grandmother, and the subject of the 2003 novel El paraíso en la otra esquina—The Way to Paradise—by the Peruvian Nobel laureate Mario Vargas Llosa), who records the visit in her Promenades dans Londres (1840):

‘He lives in a small room and he is not averse to passing the time of day with visitors.  We had rather a long visit with him; his conversation and his habits denote a sentimental and loving heart, a pressing need for affection, and he has had in succession two dogs, three cats, several birds and finally a squirrel.  He was extremely fond of his animals and was grieved at their deaths; he mounted them himself and keeps them in his room.  These remains of his beloved creatures all have epitaphs in verse which express his sorrow.  Above the verses for his squirrel there is a coloured image of the friend he lost.  I might add that he does a brisk little trade with his feelings, handing out the epitaphs to visitors who in return give him a few shillings’ (tr. Dennis Palmer and Giselle Pincetl, Flora Tristan’s London Journal, p. 163).

The archives at the Bethlem Royal Hospital have various examples of Hadfield’s squirrel poem.  I wonder how many others survive?

Posted in
Previous: Undercover books Next: The art of reading

One response to “A souvenir from Bedlam”