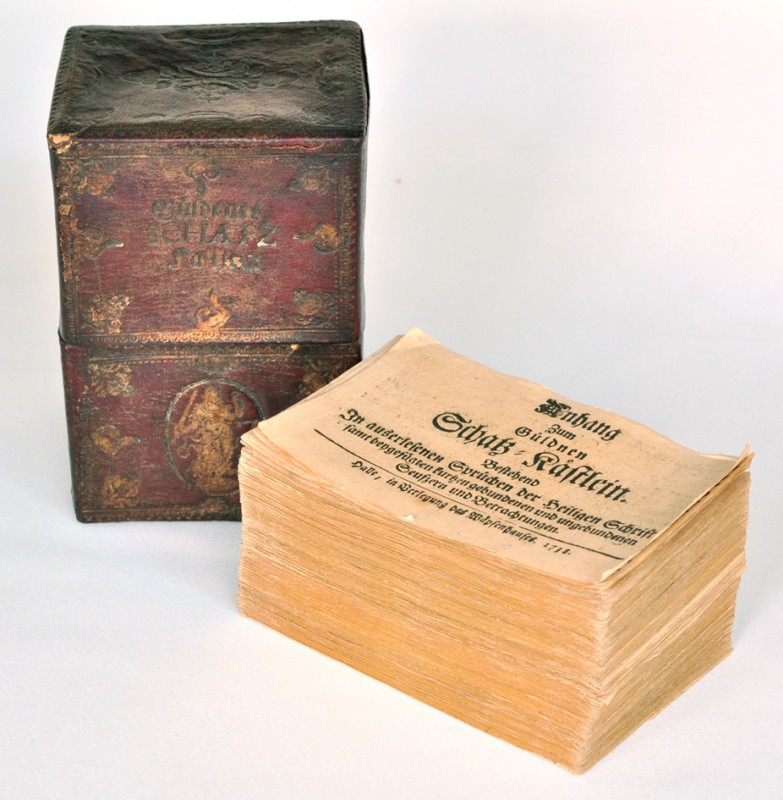 Books in boxes have always held a particular appeal.  But this I found particularly attractive.  It’s a book from 1738, Güldenes Schatz-Kästlein der Kinder Gottes (A Golden Treasure Chest for the Children of God), which has been cut into individual leaves, all the edges gilded, and then put into a custom-made gilt-tooled morocco box which features the figure of Justitia and the seal of the Society of Jesus.

The author of the book was Karl Heinrich von Bogatzky (1690–1774), an impoverished Silesian nobleman.  He studied first law, then theology, before in 1745, suffering from ill health, was admitted into the Waisenhaus in Halle, a charitable foundation, where he remained until his death.  It was here that the book was printed.

Bogatzky’s Güldenes Schatz-Kästlein, which consists of daily biblical passages with explanatory notes by Reformed theologians and some short poems, was hugely popular, and went through countless editions—it had reached a forty-third by 1846—and not only in Germany either: there were over 20 editions published before 1801 in both Britain and America, including versions in Welsh and Tamil, and the British Library catalogue adds almost another 50 English editions before 1920.

The book’s appeal appears to have been interdenominational, too.  This copy was probably never bound as a book, but was immediately transformed into a Jesuit ‘golden treasure chest’.

Posted in
Previous: Silhouettes Next: The First World War, from other sides