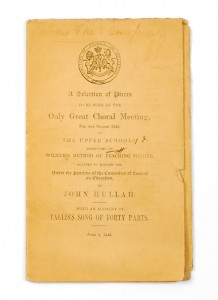 Thomas Tallis’s forty-part motet, Spem in alium, is one of the greatest achievements in Renaissance music.  It is a monumental work, and the earliest surviving manuscript (with an English text, ‘Sing and glorifie heavens high Maiesty’, for when the piece was sung probably at the investiture of Henry as Prince of Wales in 1610) is just as imposing at 2½ feet tall.  (It is now at the British Library (Egerton MS 3512), but was on show recently—a rare outing—at the Bodleian’s wonderful exhibition ‘Hallelujah! The British Choral Tradition’.)

Suzanne Cole, in Thomas Tallis and his Music in Victorian England (Boydell Press, 2008), charts the afterlife of Spem, through the extant manuscripts (it was not published until 1888) and the known performances.  The first such performance—the first since 1610—was in 1836, in English, by the Madrigal Society, when 150 singers took part.  The next, in 1845, was really quite extraordinary: 500 singers (a ‘semi-chorus’ taken from a choir of 1500) who, rather than use the English words (‘too trashy for endurance’, The Times), performed the work to sol-fa syllables.  The impresario behind it all was John Pyke Hullah, a music teacher whose singing classes, by the late 1840s, were attended by literally thousands of people.

As Cole notes, the provision of parts for a choir of this size must have proved a real challenge.  Some of the parts survive, now British Library Add. MS 29968, purchased from the Glee Club in 1876. 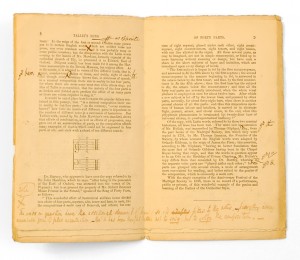 These page proofs, corrected by Hullah himself, list the full programme for the concert, and include a potted history of Spem, ‘at once the most curious and the least known of the compositions of Thomas Tallis’ (p. 7).  I am pleased to say that this little pamphlet (of which no other other copy is recorded), like the manuscript itself, is now owned by the British Library (shelfmark C.194.a.1177).

Posted in
Previous: The art of reading Next: The Melon, a poem