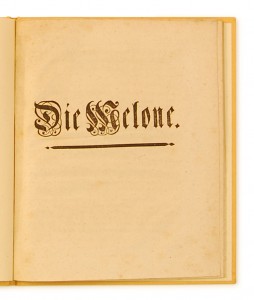 Six cantos, each over 100 lines in trochaic octameter, on the subject of melons was always going to be an odd book.  I admit, I bought it as a curiosity because of the title, but once I’d had a chance to read it, I discovered it to be even more extraordinary than I could have imagined. 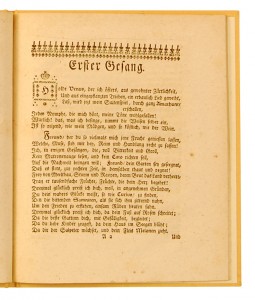 The poem, published, to judge from the paper and the printing, in the late eighteenth century, seems to be a work of early German Romanticism: the action takes place in a dream, and the poet mixes elements of Classical mythology and medieval epics.  The hero, Arist, gives a speech before Venus, after which he is awarded with a melon and allowed to select a nymph (the catwalk features beauties from Iberia, Russia, China, France, etc.) to be his bride.  After making his choice, the dream is shattered; he meets an old crone who, having given him a drink, turns into Melonia, the fairy queen, thereby breaking a spell cast by Merlin.  (I’m not making this up.)  A giant appears with an enormous melon which, after a few words of Arabic, turns into a golden coach, its seeds into horses, and they ride off through the sky; fireworks go off around them; fairy festivities ensue, with food, music and theatricals.  But things change suddenly once again, and Arist finds himself in a garden, before Merlin arrives on a dragon.  Merlin had been spurned, it turns out, by the fairy queen, and so, with a flick of his magic wand, banishes Arist to a melonless desert, where he is left to compose elegies.  The poem ends with an exhortation to youth not to let time pass without enjoying it, else you, too, may find yourself left with ‘matrons instead of nymphs … or cucumbers instead of melons’.

An extraordinary poem and, it seems, the only recorded copy extant.