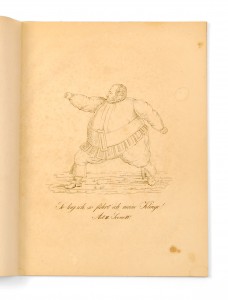 Ludwig Devrient (1784–1832), ‘the greatest of all [German] Romantic actors’ (Williams, Shakespeare on the German Stage I, 135), revelled in finding a role he could get his teeth into.  He had already proved himself in Shakespeare (his chronic alcoholism notwithstanding) with Shylock and King Lear, and his appearance as Falstaff in March 1817 won universal public acclaim; the Allgemeine Deutsche Biographie calls the performance ‘seine Glanzschöpfung auf komischem Gebiet’.

This suite of lithographs appears to have been brought out following Devrient’s death.  The Berlin publisher Alexander Cosmar (1805–1842) was particularly interested in the stage.  He wrote a number of Festspiele himself, and published the Berliner Theateralmanach (1836–41) and the Dramatische Salon (1839–42). 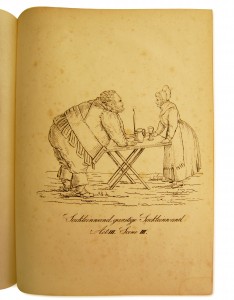 Although the book itself does not mention that it is Devrient in the illustrations, one of them is reproduced in Theo Piana’s Lodernde Flamme: Aufstieg und Untergang des Schauspielers Ludwig Devrient (Berlin, 1957), which took a bit of hunting down, but I was pleased to discover it and be able to tell the story of this very rare illustrated book. 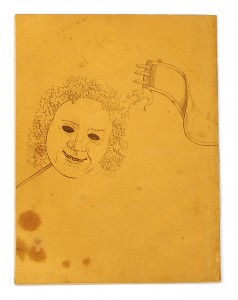 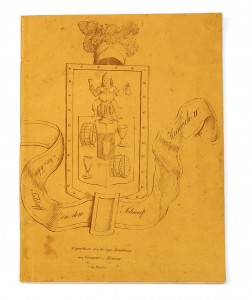 Posted in
Previous: The Melon, a poem Next: Moscow reads New York