In the past, I’ve written about spies and translations and just recently I bought a book in which both interests converge: Die verrätherischen Plane Englands und der Jakobiner wider das Leben des Kaysers, und die Freyheit des franz. Volks (1804), an account of an anti-Napoleon British spy ring based in Europe. 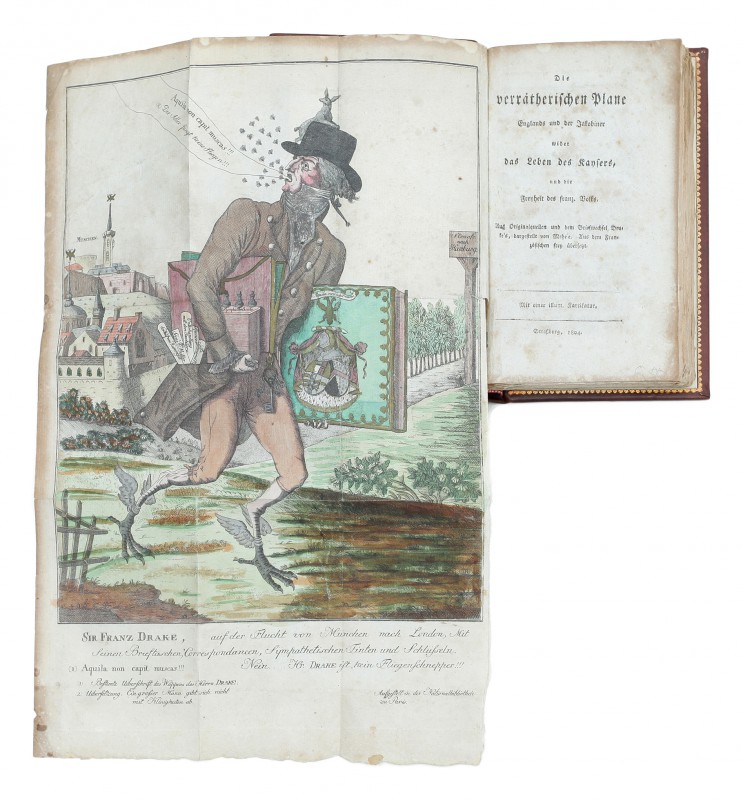 The author, Jean-Claude-Hippolyte Méhée de la Touche (1762–1826), was a French spy, first in Russia, then Poland, and finally England, where he kept tabs on those French émigrés who opposed Napoleon.  Posing as a sympathiser, Méhée inveigled himself into their circle, and was recommended to the British Foreign Office, which sent him to Francis Drake (1764–1821), ambassador to Bavaria and head of the British East European spy network, who provided him with codes and names of agents.  In 1804, Drake was embarrassed when some letters, revealing plans of a French uprising against Napoleon, were intercepted and passed on to ministers in Paris, and duly published (Geheime Instruction und Briefe des englischen Gesandten in München an die englischen Agenten in Paris).

The German version of Méhée’s account is very rare and, unlike the French original, is furnished with a wonderful, large caricature of Drake, fleeing from Munich after the affair broke clutching books, papers, and phials of invisible ink.

Posted in
Previous: Britain's got talent Next: Don't they know there's a War on?