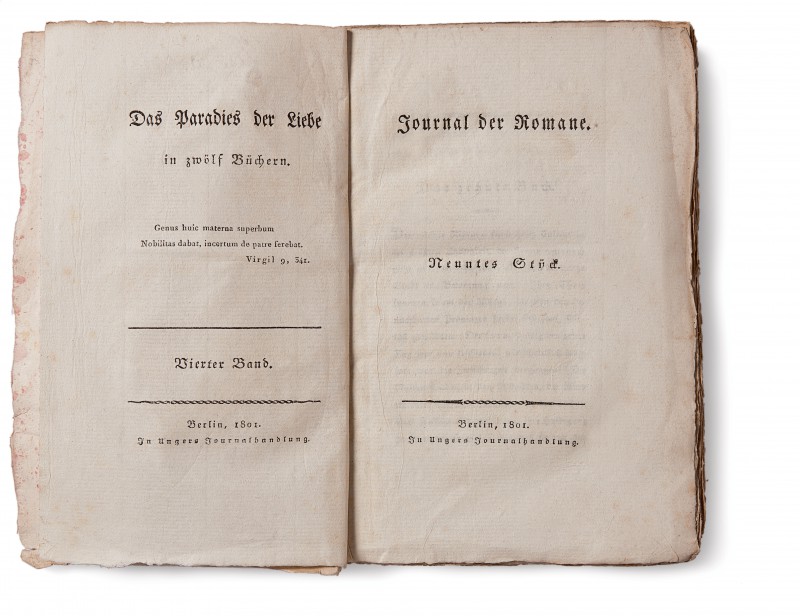 This is the first edition of a utopian novel by the American friend of Wieland, Schiller and Goethe, James Lawrence (1773–1840).  Born on Jamaica (his family had lived on the island since 1676), Lawrence was educated at Eton and Göttingen.  ‘In 1793 his essay on the heterodox customs of the Nairs of Malabar with respect to marriage and inheritance was inserted by Wieland in his Der Teutsche Merkur and in 1800 Lawrence, who seems in the interim to have lived entirely on the continent, at Schiller’s behest completed a romance on the subject, also in German, which was published in the Journal der Romane for the following year, under the title of “Das Paradies der Liebe”, and reprinted as Das Reich der Nairen.  The book was subsequently translated into French and English by the author himself, and published in both languages [though in the event it banned in France]; the English version, entitled The Empire of the Nairs [or the Rights of Women.  An utopian romance] was published in four volumes in 1811 by Thomas Hookham …  The novel’s attack on the institution of marriage and its advocacy of matrilineal inheritance was influenced by William Godwin, Mary Wollstonecraft, and the French philosophes …  On 17 August 1812 Percy Shelley wrote to Lawrence “Your ‘Empire of the Nairs’, which I read this Spring, succeeded in making me a perfect convert to its doctrines”, and he met with Lawrence in London the following year.  The novel exerted an important influence on Shelley’s poem Queen Mab (1813) and other works’ (Oxford DNB).

Posted in
Previous: Used in the trenches Next: 'Probably the strangest private press of all time'

One response to “The rights of women, a novel”