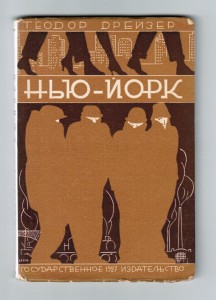 1927 saw two Russian translations of The Color of a Great City (1923), Dreiser’s classic memoir of early twentieth-century New York: this one (Gosizdat’s), by Pyotr Okhrimenko, and one for “Mysl’” (Kraski N’iu-Iorka) by V. P. Steletsky.  What was particularly nice about this copy was that it still had its original dust-jacket: 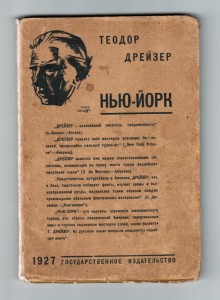 Pyotr Okhrimenko (1888–1975), a translator for the Komintern, produced numerous translations of American literature in the 1920s and ’30s: Jack London, Mark Twain, Ernest Hemingway, Upton Sinclair, Sherwood Anderson.  A staunch Tolstoyan, he had decided to emigrate to America after the 1905 Revolution.  But he was unable to find work, so he asked Tolstoy himself for help and was provided with a letter of recommendation to Thomas Edison, who took him on in one of his factories.  He returned to Russia in 1911.

Dreiser, alongside Mark Twain, was to become the most popular American author in Russia, hailed by Soviet reference works and critics as the foremost ‘progressive’ American writer of all time.  In 1950, when Goslitizdat announced a twelve-volume edition of Dreiser’s collected works was to be published, in a staggering 900,000 copies, subscriptions sold out within days.