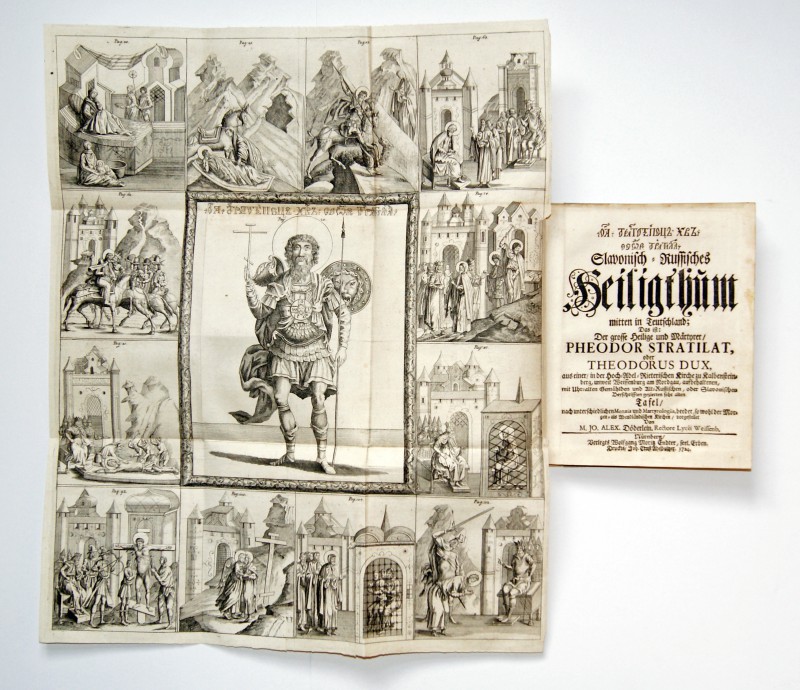 Published in Nuremberg in 1724, this is the first edition of apparently the first monograph on a Russian work of art, namely the icon of the 4th-century warrior saint Theodore Stratelates in the Rieterkirche St Marien und Christophorus in Kalbensteinberg, Bavaria, a church on the pilgrim route to Santiago de Compostela.  So rich were the collections in the church that it was known as the ‘Franconian treasure-chest’.

The author is the Baroque polymath Johann Alexander Döderlein (1675–1745), Rector of the Lateinschule in Weißenburg.  The same year he also wrote a 12-page account of the icon in Latin, Inscriptiones slavo-russicae tabulae, published at Tyrnau (present-day Trnava, Slovakia), but that was unillustrated.

According to one source, the large folding frontispiece is the first depiction of a Russian icon in Western art.  Interestingly, the note to the binder on the final leaf gives three options with regard to the frontispiece: fold it and bind before the title (as here); cut up the engraving, and bind the individual pictures at the relevant places in the book; or loosely insert the plate, so that the reader can look at it whilst reading the book.